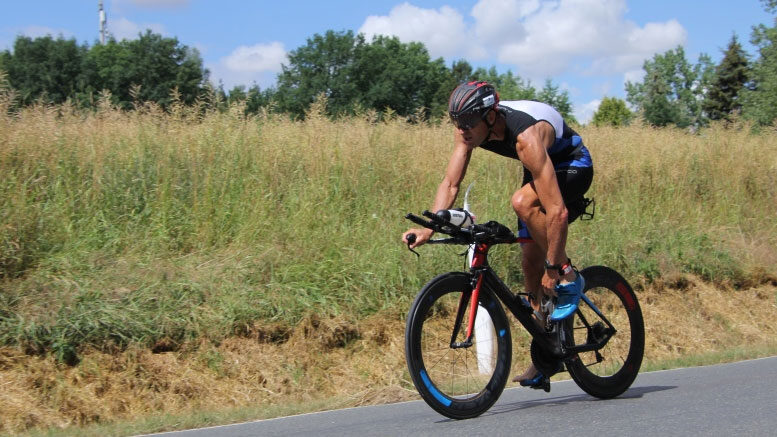 This year, this competition really has to be given both of the above headline designations. In any case, suboptimal was the fact that we had to forego swimming due to restrictions imposed by the dam administration and that we – and the organiser – had to deal with declining numbers of participants. Unfortunately, this is a consistent development in this year of the first openings after Corona.
Optimal was the weather and the completely convincing and professional organisation of this competition. Many thanks to Ronny Enke, his whole team and also the newly won main sponsor GAZ Notstromsysteme GmbH as well as the SV Sachsen 90 Werdau e.V..

The early start at 9:45 a.m. ensured pleasant temperatures for all participants during the competition. In addition, there was a mild breeze … very pleasant. Laurent Martinou was able to pull away from the start during the first 5 km run, always closely followed by Ferenc Csima and Nick Verduyckt, the young Belgian who made his Quadrathlon debut here. Nick also achieved the best time on the bike, but Laurent also stayed in the leading group, which was completed by Leoš Roušavý and William Peters. So the Belgians were the second most represented nation.

The absolute top performers in the kayak, however, were Ferenc and Nick, who made life difficult for Laurent with their paddling performance and again demanded everything from Laurent in the running. Despite his break from competition, Laurent was definitely the running king of the day. Nevertheless, this year there is no way around Ferenc, who took the day’s victory ahead of Laurent by a clear margin. Rather tragically, young Nick managed an excellent third place, but injured himself so badly at the finish that he had to be admitted to hospital.

Best German on this day was Tomas Kälble behind Leoš and William. In the women’s race Susanne Walter really doesn’t let anything go to waste this year and won here sovereignly ahead of Undine Weihe and Andrea Kuhlmey. Quadrathlon4YOU is the news page for and by quadrathletes. So get involved: share your experiences, chat with others in the Forum, or let us know about new races (read more).

Open
The dates for 2022 are finally online at www.quad

The dates for 2022 are finally online at www.quadrathlon4you.com. However, a few are still missing. If you know dates or even new competitions, please let me know. Please also remember to register early for the competitions – this is the only way for the organisers to have a safe planning. All the best and good health – in this still strange time!

Open
After the success achieved in the 2019 edition, th

After the success achieved in the 2019 edition, the world of the quadrathlon met again in the Toledo town of Cazalegas last Sunday, September 26. But before continuing, the reader will arise the question “what does the quadrathlon consist of?” Quick, simple and direct answer: It is the most complete sport of all, in which to the three traditional triathlon disciplines (swimming, cycling and running) we add a tougher one if possible, kayaking...

On 12 Sept the middle distance European Championship was hold in Tiszafüred Hungary. The event was organised by the Hungarian Sri Chimnoy Marathon Team with the help of local canoe club on the water. The circumstances were like in summer. Air temperature up to 30 degrees, light wind, water temperature 21 degree...

Great to be back at in Shrewsbury for the 8th Shrewsbury Quadrathon, it was cancelled due to Covid in 2020, but this year with some covid restrictions in place SYTRI were determined to give us a great event …. and that they certainly did! The weather this year was perfect, as always the race was brilliantly organized and the atmosphere buzzing, though for many of us it was back to racing for the first time since ‘Covid lockdown’ so a some apprehension on the start line, but with plenty of smiley friendly quadrathletes offering reassurance the nerves were soon gone...

Last weekend the German Ratscher hosted this years Sprint World Championship. The event as always were extraordinary organised – thanks to Sebastian Diez and his team. The weather conditions were like in late summer, with temperature around 25 degree and light wind. Lake temperature with 18 degrees was also comfortable for wetsuit swimming...

Registration for the European Championships (middle) at Tiszafüred (HUN) is open.

Open
A few days after the race in Kaposvar, it is time

A few days after the race in Kaposvar, it is time to look back and take stock. It should have been a great competition weekend in Hungary, with the Sprint World Cup on Saturday and the long-distance World Cup on Sunday. But on Friday, as the first athletes arrived at the lake, they had a great shock – Lake Deseda had transformed due to the long heat wave in Hungary...

Open
With Covid Restrictions and so much uncertainty re

With Covid Restrictions and so much uncertainty regarding regulations we were unsure how the Deva Divas Ladies Races would go this year. The 12 week Kayak course which I organize pre-race, had been full, we had some cancellations, but we managed an excellent 9 weeks with all 7 Girls doing very well and paddling K1 race Kayaks beautifully on Race Day, which was so rewarding!